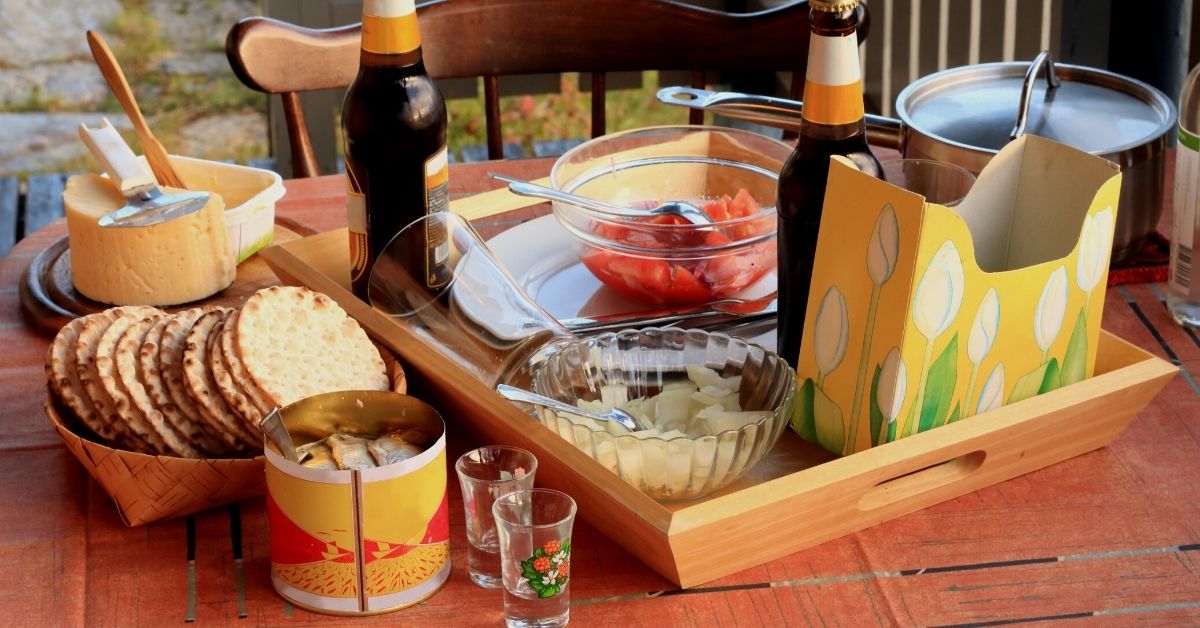 You’ve heard of the Swedish Meatballs; how about Swedish surströmming? The Swedish also call the fermented herring the ‘hunger stopper,’ and there is even a festival devoted to eating surströmming! The surströmming is tasty (for the chosen few) but may be very unpleasant to many ordinary folks like you and us.

If you happen to be an ever-curious traveler or food enthusiast in Sweden, the surströmming might just be the meal you will never forget (and we don’t just mean the smell). In a nutshell, the surströmming is a Swedish delicacy derived from the Baltic sea herring and then fermented for about 6 months before being sold to the general public.

In this article, we will be going through everything you need to know about the surströmming, including what it is, how it’s made, why Swedes eat them, how to eat surströmming the proper way, and a surströmming surprise challenge for you and your loved ones to try for yourselves! And with that being said, let’s dive right into it.

The surströmming, also known as the Baltic sea herring, is a fermented fish Sweden is known for, that’s considered to be the world’s smelliest food to date!

Surströmming comes from the Swedish word “sur,” which means sour. But how can a fish be sour? This is a special type of fish that is fermented in brine for months until it becomes viscous and can be used as a dish.

The fish is buried underground out of doors for between two and six months in a mixture of water and about 6% salt by weight, fermenting in its own juices and bacteria from the lactic acid produced in the fermented herring’s spine. The fermented fish Sweden is known for should be eaten very fresh before it starts emitting gasses from the can.

The fermented herring has earned its particular Swedish name for a reason. The Swedish name of the surströmming dish literally translates to wrecked (or putrefied) herring. With a very low pH and high levels of salt, lactic acid, and ammonia, the fish ferments in a barrel or large jar under its own weight. The salt is present to ensure the surströmming doesn’t rot as the traditional way Swedes practiced before fridges existed back in the old days.

The fermented herring has such a strong smell that it is illegal to transport in public transportation or ship by the sea! In fact, the cans of fermented herring must be transported in a separate vehicle (with a well-sealed rear door). This fermented fish Sweden is known for, is also widely banned on airplanes for causing too much interference with the pilot’s radio equipment and the fear that the can of fermented herring might explode and cause (a very smelly) damage to other passengers’ luggage. You should never open the can in public or near people you don’t know.

You can immediately see why the fermented herring isn’t for everyone. In fact, many Swedes consider surströmming an acquired taste over the years as Swedes (mainly traditional Swedes) have in the past.

The answer lies in its fermentation process. The Swedish surströmming is not just salted like other types of herring; the surströmming is fermented with large amounts of lactic acid, bacteria, and salt. The result is a very acidic environment – perfect for some microbes!

However, the acidity level also makes it difficult for most microorganisms to survive, which helps preserve the stinky fish for extended periods. Only those with extremely acid-tolerant properties can thrive in such conditions. This leads to an off-flavor and smell of the fermented fish Sweden that can only be described as “pungent.”

As a matter of fact, the surstromming fish made its way to Sweden’s infamous Disgusting Food Museum in Malmö (yes, it is an actual thing). While there are other unusual food delicacies such as the hákarl from Iceland or the Cuy from Peru, surströmming simply outshines them all as the star of the museum and for a valid reason.

Most of those who visited the museum ended up being sick while visiting the museum due to the strong, pungent smell of this fermented fish Sweden is known for. Some have dared to take their taste buds to the test by trying surströmming. Most of those who did ended up spitting the fermented herring right back out as soon as they tasted it.

Many people don’t really like surströmming, but there are also those (especially traditional Swedes) who love the fermented herring! It all depends on your taste buds and whether or not you can handle that incredibly stinky fish smell.

Where should you eat surströmming?

Because of its smell, the fermented herring is usually best eaten outside, especially if it is your first time trying surströmming. Locals may choose to eat it inside just because they have already gotten used to the pungent smell, so long as the room is well ventilated, of course.

Note: If you’re planning to try out the fermented herring, you’ll have to be careful when opening the Surströmming tin can as there are gasses inside that might cause your can to explode!

The fermented herring is stinky and is nowhere near delightful to taste like that of a 3-Michelin star dish, yet some Swedes enjoy eating surströmming. There’s only one word that you have on your mind: why eat the fermented herring then? Well, we’re glad you asked!

The Swedish surströmming is a stinky fish that is fermented for a few months so that it becomes soft and slimy. The fermented herring stench is so foul that it has been banned from many public places in Sweden.

The thing is, the Swedish surströmming is more popular in Sweden than in any other country in the world. The tradition of eating fermented herring goes back hundreds of years to a time when people didn’t have refrigerators and had to find a way to preserve fresh fish like fermented herring for more extended periods. Back in the day, Swedes needed to salt, dry, and can Scandinavian food to preserve them through the cold and brutal winters.

The Swedes have managed to turn this stinky fish into a cultural symbol of their national pride. There are at-home parties on balconies or gardens where people gather together around the fermented herring and celebrate its stench each year. Eating the fermented herring is also a great reason to throw a party or hold a gathering event to spend some quality time with those we hold dear.

Though the Swedish surströmming fish is by no means near a dish any Swede would opt for, the fermented herring can make a great conversation starter if you want to impress someone with your knowledge about weird food traditions!

How is the surströmming fish served?

As soon as you slowly open the can of fermented herring, take the surstromming fish out, and wash it thoroughly with cold water. Then carefully gut the fermented herring into nice filets to be served in a well-known Swedish dish described below.

To make this Swedish dish, you will need to prepare the following ingredients:

Once you are all set, we will be making a sandwich, also known as the surströmmingsklämma, using these ingredients. Simply place a small amount of surströmming on the thin bread. Add an appropriate mix of chives, dill, waxy potatoes, and the diced red onions you would like. Then wrap the thin bread around the mix of ingredients, and voila!

To top that off, Swedes usually serve the surströmmingsklämma with a hard cheese called the Västerbottensost, lager, and snaps to seal the deal. Though not all Swedes do so, some Swedes say that having a surströmming sandwich with a glass of milk. We would say that it is worth the try while you’re at it!

So, after getting to know about the surstromming fish, you might still wonder who would eat surstromming in the first place? You would be surprised if we told you that some actually enjoy eating them.

Indeed, surströmming is one heck of a stinky fish, and even Swedes don’t pick up the liking for the taste immediately, as it takes time (and tolerance for the smell, of course).

Surströmming is an acquired taste; most Swedes don’t eat it except at traditional midsummer celebrations, and they’re called surströmmingsskivas.

The only other people who are likely to enjoy it are adventurous tourists who want to try something new or hardcore foodies who love everything from the Surströmming, the world’s most disgusting delicacy, to durians, the king of fruits.

How to eat surströmming

If you find yourself at a surströmming festival, you know it best comes with alcohol. But, if you choose to have it in the comfort of your own home or place like the locals do, then you should have it as a sandwich as described above.

That is, you wrap the little bite-sized portion from the surströmming fish filets, waxy potatoes, and red onions in Swedish flatbread. Locals typically pair this delicacy with a few glasses of beer, family, friends, and snaps as a way to spend some quality time together. That is how to eat surströmming the Swedish way.

If you ask us, that is not a bad reason to try out the fermented herring now that you know how to eat surströmming.

When do you typically consume surströmming?

The Swedish Surströmming is considered a special delicacy during summers and is mostly sold from the third Thursday of every August, which was set as a tradition from a long-gone decree where Surströmming cannot be sold before this day. Today, it still serves as a long-standing mark of the start of the Surströmming season.

Though the Surströmming cans are now sold from May to September, mostly in Northern Sweden, it is best and most popularly eaten every August to around September.

This is because it is when a special Surströmming event called Surströmmingsskivan (Surströmming platter) will be held in Alfta, Hälsingland, located in northern Sweden just for those who celebrate eating the Surströmming with their loved ones. Normally, this will be followed by a handful of strong alcohol, including bitters, aquavit, or vodka, as most Swedes enjoy.

Note: There aren’t many Surströmming parties outside northern Sweden, but if you do find one, we highly encourage you to make the most out of the experience and have your first bite at the fermented herring.

Here are some video links of how they managed to attempt and/or pull off the Surströmming challenge (Warning: Please be advised that some videos may contain uncensored graphics)

If others have made it through the surströmming challenge, then we believe you can too!

Note: If you have any underlying health issues, especially associated with your digestive tract, we recommend consulting your local health care provider, just to be safe. Never force yourself to it if it risks your health.

Whether you love it or hate it, Swedish surströmming is certainly highly memorable. The world’s smelliest food does not disappoint in the taste department either. Whether or not that’s a good thing is up to you to decide.

This particular delicacy is not likely to become a staple of the American diet, but it shouldn’t be viewed as something odd or unique — this flavorful dish is representative of an island nation that has a history filled with plenty of stories and oddities.

Maybe not a fan of fermented herring, but want to do some fishing in Sweden? Make sure you read this article!